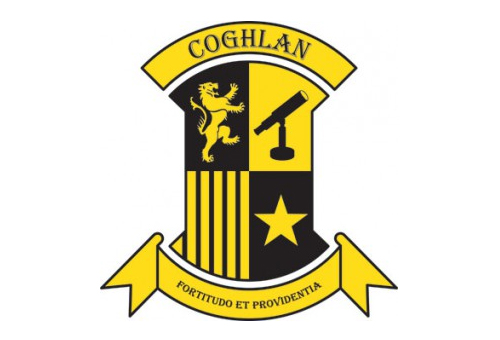 The Lion: proudly striding forth represents the courage of Br Coghlan’s convictions, to make tough decisions in the face of adversity and to be brave when facing challenges.

The Telescope: symbolises Br Coghlan’s great vision and belief in the College’s potential. It also serves as a reminder to keep our sights set on the ideals of Blessed Edmund Rice as we embrace the future.

The Star and Bars: symbolise strength and fortitude and are taken from the College Crest, another Coghlan initiative. These together with his motto ‘Luceat Lux Vestra’ are embedded within the ethos of St Patrick’s College.

Coghlan House honours the memory of Br John Vincent Coghlan, Headmaster of St Patrick’s College for two terms, 1936-1941 and 1945-1950. He played a leading role in developing the College’s identity and whilst he may not have laid the first stone, he introduced the strong foundations upon which the College has flourished. John Vincent Coghlan was born in Brunswick, Victoria and educated at St Patrick’s College in Ballarat. He joined the Christian Brothers in 1909 and at the age of 16, came to Mount St Mary in Strathfield to commence his training. Following this, Br Coghlan undertook a number of different teaching and leadership roles in Sydney, Brisbane, Adelaide and Hobart, before being appointed Superior at Wagga Wagga. In 1936 however, Br Coghlan embarked on the first of his two appointments as Principal of St Patrick’s College, Strathfield.

From the onset Br Coghlan recognised the College’s great potential, but knew that if it were to be realised he would need to start with the students. One of his first challenges was to instil a sense of school spirit and pride within the students and with this in mind, Br Coghlan introduced the College crest, the College uniform and the College motto, Luceat Lux Vestra. He also appointed the College’s first student leadership team and even instructed one of the Brothers (Br Butler) to create a suitable war cry for our students to take to the sports field with. He also completed building projects like the tennis courts and was able to secure more land for the expansion of Breen Oval.

Under Br Coghlan’s leadership the ensuing years saw us enjoy some outstanding academic and sporting successes. People began to notice the smartness and politeness of the Christian gentlemen who came to the College, and as a result enrolments increased dramatically. Perhaps Br Coghlan’s greatest legacy however is our school spirit which has remained deeply engrained within the culture of St Patrick’s College.