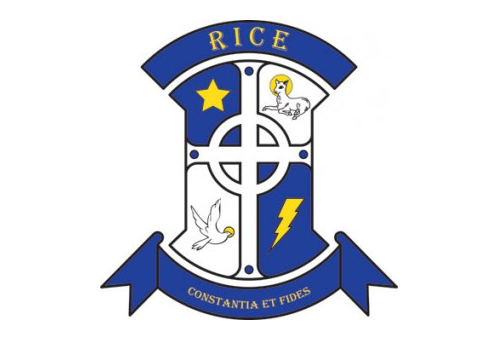 The Star: signifies the lighting of our way to knowledge and the Heavenly Father.

The Lamb: taken from the Edmund Rice Icon, it symbolises the Lamb of God, Jesus Christ.

The Dove: reminds us that Blessed Edmund Rice was gifted by the Holy Spirit, just as we sing in the Edmund Rice anthem.

The Lightning Bolt: not only recognises the fact that Rice house was originally named Power House, after the former Parish Priest of Strathfield, but also serves to remind us that when we put our energies together we are a powerful force.

The Celtic Cross: at the heart of the crest not only symbolises the origins of Blessed Edmund Rice and his congregation of Christian Brothers, but above all Christ, who lives in our hearts forever.

Rice house pays tribute to our Founder, Blessed Edmund Rice, an exceptional human being who dedicated his life to God and the education of the poor and marginalised students in Ireland.

Edmund Rice was born in Callan, Ireland to a farming family. At the age of 17, Edmund joined his uncle in a shipping supply business in the busy city of Waterford, which subsequently grew and prospered. After some years Edmund met Mary Elliott whom he fell in love with and later married. However this happiness was short lived as sadly only 2 years later she died, leaving him an invalid daughter, for whom he cared lovingly throughout his life. It was at this time that Edmund became even more sensitive to the plight of the poor and upon joining a spiritual association of men in Waterford, grew increasingly uneasy with the wealth he was acquiring through his business. Edmund felt that God was calling for him to make a change in his life and so he decided to do something about the poor neglected boys of Waterford and their desperate need for education. In 1802, at the age of 40, Edmund Rice turned a disused stable into his first small school, moving the following year to the monastery and school he built at Mount Sion.

Edmund faced many challenges in his mission, not least of which was to find staff to teach such ‘unruly’ boys. However it wasn’t long before word spread of this courageous enterprise and in 1808, with six companions who had come to join him, he pronounced his vows as religious. In Edmund’s lifetime his congregation of Christian Brothers spread throughout Ireland and on to other corners of the globe, reaching Australia in 1843.

Today his mission is continued in over four hundred foundations in twenty-two countries. St Patrick’s College, Strathfield stands proudly as an inheritor of the charism of Edmund Rice and the Christian Brothers who came to teach here. Edmund Rice was beatified on October 6, 1996 in Vatican City by Pope John Paul II.