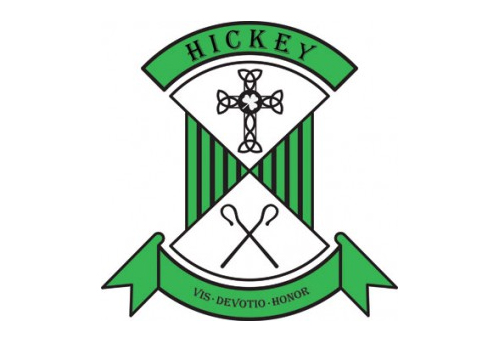 The Bars and Chevrons: recognise Br Hickey’s efforts in establishing the solid pillars of the College’s foundation and the strength from which it has grown. The word chevron is a French term for roof, an overarching structure that provides us with protection and unity.

The Celtic Cross: epitomises the essence of Br Hickey, and his devotion to the Christian Brothers.

The Shamrock: in the heart of the cross represents both Br Hickey’s Irish heritage and also that of our Founder, Blessed Edmund Rice.

The Shepherd Staffs: refers to Br Hickey’s ability to recruit suitable young men into the Brotherhood of the Christian Brothers, he was one of ‘God’s Shepherds.’

Hickey House honours a man who holds a significant place in the College’s history. In fact without the vision of Br Patrick Ignatius Hickey; St Patrick’s College would not exist today. Patrick Hickey was born and grew up in Athy, Ireland subsequently becoming its first Catholic Town Clerk at the tender age of 16. This appointment he retained until at age 19, when he decided to join the Christian Brothers. For almost 40 years Br Hickey taught in various schools in Ireland before being summoned to Australia in 1920, in order to fill a vacancy in the Executive Council of Brothers here.

One of the first challenges Br Hickey undertook in this new role was to seek out a supply of Brothers to staff the existing schools within the Australasian Province. He was so successful at finding young men who would be suited to this vocation, many felt he was directed and guided by the Spirit of God Himself.

In 1925, Br Hickey was promoted to the office of Provincial Superior which presented the opportunity to further develop his plans for the welfare of the Province. One such project was the erection of a ‘Practising School’ at Strathfield to coincide with the Teacher Training College at Mount St Mary. And so the building operations of St Patrick’s College began and were overseen on a daily basis by the visionary Br Hickey.

Sadly however in 1927, due to ill health Br Hickey resigned as Provincial and travelled back to his beloved Ireland and then on to Bath in England where he was eventually laid to rest. This meant that he didn’t get to see one of his greatest legacies, St Patrick’s College, in all of its glory.