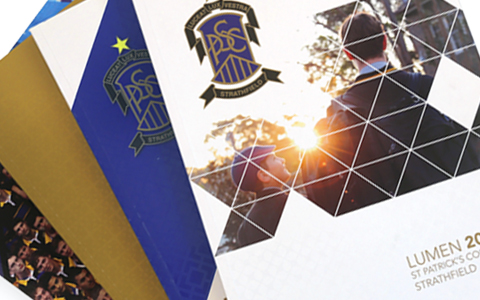 In December 1943 the St Patrick’s College Lumen was first introduced. Its name, a Latin form of the word meaning “light”, was chosen by Br J P Crichton to echo the College motto “Let your light shine” and its editor was Br J A McGlade. The formal photos of classes and sporting teams which appear within its pages were the work of esteemed Sydney photographer, Mr A Foster, an elderly gentleman who would periodically visit the College with his tripod, hood and camera.

The following is an extract from the first edition:

“With its review of events of the term, it gives a voice to that intangible thing we call “School Spirit,” without which no College is at all worthy of the name. It provides a bond of unity and common thought, helps to build and maintain loyalties and traditions, weaves into the tapestry of time a permanent record of the achievements of the present for future generations to admire and imitate, and becomes a medium whereby ex-students may see the school they knew and cherish its greatness. Finally, it serves to voice that mingled murmur of news, chatter, personalities, events and mishaps that are the warp and woof of school life and lend a gayer note to its more sober side.”

Between the years of 1943-1951, Lumen was produced as a Term Review and as such was published in May, August and December each year. However in 1951 when Br R B Garvey took over from Br J V Coghlan as Headmaster, Lumen ceased production.  Whilst the reason for this has not been documented it was probably due in part to the ever increasing workload the Brothers had to undertake and the limited resources with which to do so. Certainly in 1953 when Br McGlade became Headmaster, it would have been impossible for him to continue to compile Lumen in conjunction with the day to day running of the College.Sadly these missing years of Lumen has had an enormous impact on past students wishing to research their school years in the 1950’s. Formal group photos also fell by the wayside and so in some cases we have no photographic record of boys who attended St Patrick’s College during this period. Thankfully in 1957 when Br J G Hodda became Headmaster, he so valued the importance of documenting College life he resurrected Lumen and introduced it as an annual publication.

Over the years Lumen has grown from a rather scant 24 pages to a far more substantial 250 or so page volume encompassing all aspects of College life. It has seen countless cover and format changes and different aspects of the College’s history have been reflected within its pages. One of the most notable editions of Lumen is the 1978 Jubilee issue which features a gold cover and details the story of St Patrick’s College over the 50 years since its inception in 1928. Other issues dedicated to significant events include Br Crichton’s death in 1985 and the beatification of Blessed Edmund Rice in 1996.

Past editions of Lumen