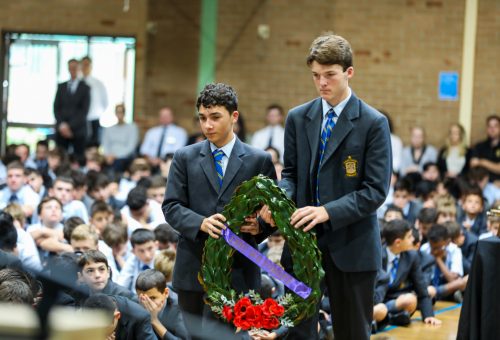 Last week, we commemorated the ANZACs during a special Assembly held in the College gymnasium. During the ceremony, we were privileged to hear from Ms Armanno who, before becoming a teacher, committed herself to seven years’ service in the army, reaching the rank of Corporal in the Royal Australian Corps of Signals. Her rank reflects a significant leadership position within the Australian Defence Force. During her service, Ms Armanno was deployed under Operation SLIPPER to Afghanistan, as part of Australia’s contribution to the International Security Assistance Force, operating in this country. Here is part of her Anzac Day reflection:

“Anzac Day today doesn’t just commemorate the death of the ANZACs during WWI. Anzac Day is also not about glorifying war. Anzac Day today includes the remembrance of all Australians and New Zealanders, both men and women who have paid the ultimate price and for those who have served their country.

I served in Operation SLIPPER in Afghanistan for six months in 2013/2014. There were many soldiers who lost their lives during the Afghanistan campaign. It was a different type of conflict to that of WWI where the enemy primarily infiltrated the Afghanistan Army who then conducted attacks on Australians who were only trying to help them train to protect their country. As well as this, there were deaths from improvised explosive devices and indirect fire. In a way, this was similar to what the Anzacs faced, an uncertain death and their courage to face the unknown was undeniable.

From experience, the freedom felt upon returning to Australia is like no other. The ability to leave your house freely, not have to carry a weapon with you everywhere and the ability to hug your loved ones are things that we take for granted daily. Please take a moment to reflect on something you do every day that you take for granted and think about how many soldiers there have been that are unable to return home to their families and enjoy one last hug with the people they love.”