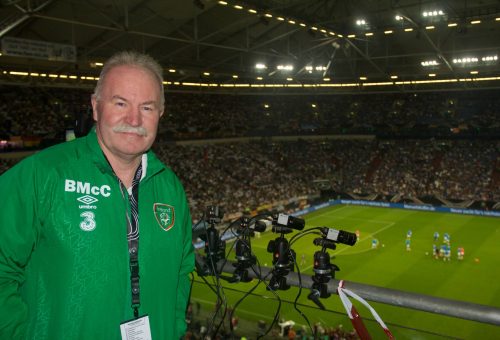 Brian hails from Ireland, is married to Eileen and together they have two sons, Peter and Stephen and are proud grandparents five times over.

Amongst a host of professional achievements, Brian has worked as the Republic of Ireland Senior International Performance Analyst for four European Championships, three World Cup qualifying campaigns and at the 2012 Euro Finals. During these campaigns he has worked closely with a number highly reputable national mangers, including Giovanni Trapattoni.

Brian also has significant experience as a Coach Education tutor and presenter, at National level, in the Football Association of Ireland’s UEFA “B”, “A” and UEFA Pro Licenses.

Brian is a highly qualified Football professional and experienced secondary teacher. He has extensive experience at international, national association, high performing schools and multiple grassroots levels – as a coach, teacher, analyst, director, administrator, designer, presenter and transformative manager. For the past seven years, Brian had held the position of Director of Football at Newington College where he has been responsible for designing and implementing a bespoke coaching curriculum, a coach identification and recruitment program, professional development for external and internal coaches as well as a myriad of strategies to promote and improve Football. During this time, Brian has worked closely with their boys ranging in abilities in both the preparatory schools and the senior school from the ages of 8 to 18.

We are confident these appointments will do much to foster and develop the already established and rich cultures of Rugby and Football at St Patrick’s College. This was an area that parents were keen to see some improvement. Their experience in guiding and mentoring coaches of all levels will no doubt prove beneficial to entire sports program at St Patrick’s.