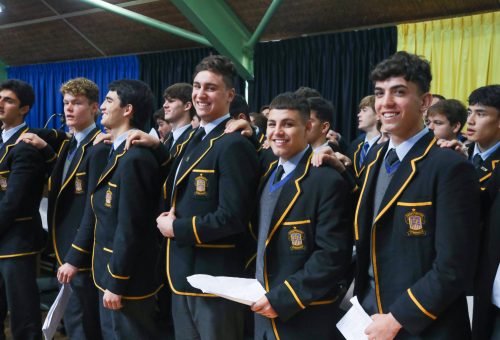 On Friday 11 June, the College celebrated Founder’s Day. It is a day when we remember who we are, where we have come from and what we are all about; a day dedicated to the founder of the Christian Brothers who established the College, Blessed Edmund Rice.

The day began with a beautiful Mass, which was concelebrated by Father Jack and SPC Old Boy, Father Ronald Maree (’10). Dr Lavorato’s homily reiterated our central theme of inclusivity and the fact that ‘we are one’. She then presented four students with the inaugural ‘Recognition of Inclusivity Award’. Our Men’s Choir led the congregation in song and at the close of Mass our voices joined together to sing the Edmund Rice Anthem with pride and gusto.

Following Mass, our Year 12 students brought the laughs to our traditional Founder’s Day Concert. Their teacher impersonations were very entertaining and brilliantly executed in the videos and on stage. We were also treated to performances from our Battle of the Bands finalists, all rocking the College Gymnasium making the decision of a winner very difficult for our judges. Congratulations to Year 9 band ‘Orion’ who were crowned overall winners. The staff, aka ‘Heffernan’s Heroes’, also entertained with their version of ‘Seven Nation Army’!

After lunch, in-keeping with Founder’s Day tradition, the whole school surrounded Breen Oval for the running of the 26th Waterford Mile. Our Drumline did a wonderful job keeping everything up-beat before our athletes took to the track. It was a superb effort by our runners who gave it everything, some having competed in the CIS Cross County Championships the day before. Congratulations to third-time winner Jonathan Meaker with Thomas Brennan (Year 10) and Harry Richardson (Year 12) also putting in great runs placing second and third respectively. It was a great end to what was a fabulous day!