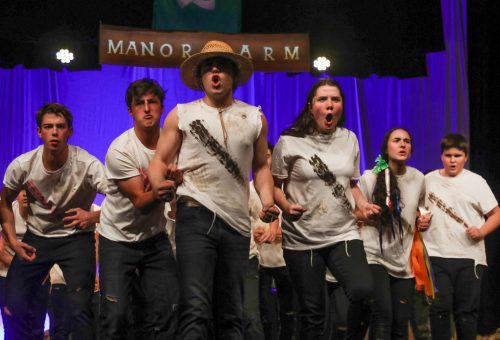 Our recent Performing Arts production, Animal Farm showcased the wonderful array of talent which exists at the College. Whether it was the crew who worked tirelessly behind the scenes or the cast who did an admirable job bringing their animal protagonists to life, the overall result was a highly entertaining and polished production.

When George Orwell wrote his novella in 1945, he could not have known it would be studied in schools so many years later. What he did know was that his work reflects not only society as it was then but what it has become now. He was a social commentator before social commentators were even a thing.

If theatre is a reflection of the society from which it springs, then perhaps this stage adaptation reflects an ugly truth and a timely reminder: the lessons of Animal Farm are even more important now than they were in 1945. Additionally, by making the decision not to mask our actors as animals, rather have them dress in clothing more in keeping with a rebellious youth, our production of Animal Farm was able to draw on its universal themes.

Thank you to all the cast, crew and families involved in this production, it was a huge undertaking, and we are so very proud of everyone who made it the success that it was. You should all take a collective bow.