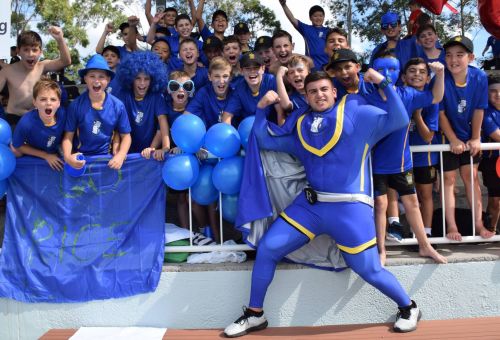 On Wednesday 6 February, the Junior School filled the stands around the Auburn Aquatic Centre for the annual Junior House Swimming and Age Championships.

The pool frothed and foamed as the boys powered down the pool, chasing the black line. There were many close races and the support was amazing. The house mascots made an appearance and quickly whipped the crowd into a frenzy. It was a spectacle of spirit and camaraderie!

Congratulations to Jack Taylor and Nicholas Macher who, between them, broke a number of Junior School records. There were also several boys that went under the old marks on the day and we recognize their efforts as well. Congratulations also to the 11s/Year 6 Hickey relay team who set a new relay record 2:51.19 (2:55.73) and the 12s Rice relay team for their record of 2:26.80 (2:44.24).

The race for the trophy was close all day. It came down to the relays to sort out the final placings. Congratulations to Jack Taylor and Noah Carr (Captain/Vice Captain) of Rice house and all the boys, on winning the House Swimming trophy for 2019.