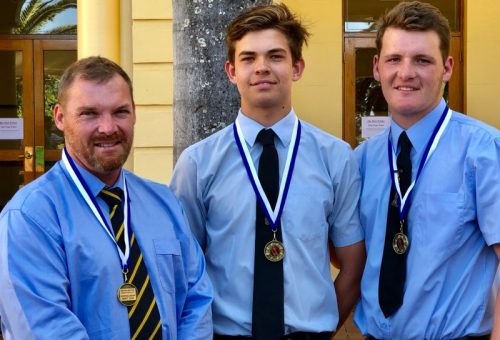 The 1st XI cricketers returned from the 39th Christian Brothers Cricket Week as runners-up in the Shield Division, losing to a talented St Joseph’s Gregory Terrace side in the Final. Prior to this game, the side had been undefeated in the five round games- winning matches against Gregory Terrace, St Patrick’s Shorncliffe, St Laurence’s, St Peter’s Auckland and hosts, Nudgee College.

A number of highlights punctuated the six day carnival: Captain Harry Manenti scored his maiden century in the 1sts, blasting 151 against St Peter’s. This followed unbeaten half-centuries in earlier games. He ultimately scored 334 runs at an average of 83.5 which saw him named Best Batsman in the Carnival. Harry also captured 5-7 in the match against St Patrick’s Shorncliffe.

At the conclusion of the Carnival, both Harry Manenti and opening bowler Albert Brooks (8 wickets at 11.4av) were named in the 2018 Australasian Christian Brothers Merit Team. Furthermore, Rob Simpson was selected as the coach of the team.

Congratulations also to fellow NSW school St Pius X who were victorious in the Cup Division against Liston College, Auckland.