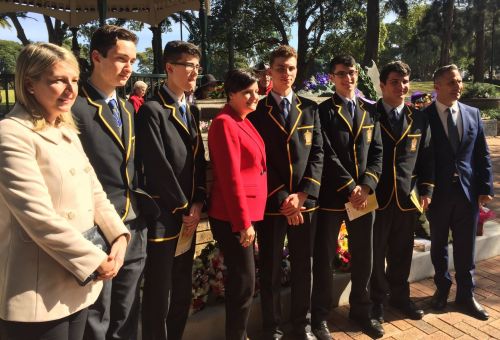 It was 1945 and three years after their capture in Singapore, that 1781 Australian Prisoners of War found themselves now interned by the Japanese Army in Borneo. They were used as labourers to build a military airstrip at Sandakan. At the beginning of 1945 after enduring starvation, overwork and beatings, the POW’s were forced to march 260 km west into the mountains to the small settlement of Ranau. The loss of life on these marches was tragically high. Australian POW’s died due to exhaustion, disease, were shot or were beaten to death. At the war’s end only six survived!  Each had escaped into the jungle and was assisted by the locals until rescued by allied forces in August 1945.

At the Sandakan Memorial in Burwood Park, an annual Remembrance Service is held to honour and recall the loss of life and sacrifice made, during this dark period of World War II. Nicholas Bamford, Noah Palozzo, Gianluca Pecora, Carlos Hasham and Luke DiGiacomo were representatives of the College. They were involved in readings, led prayer and laid a wreath on behalf of St Patrick’s College.

As time lapses and veterans of these campaigns are no longer with us, it is vital that we actively remember their sacrifice and contribution to Australian society. The Sandakan Remembrance Service is an important community event and it was significant to continue St Patrick’s involvement with it.