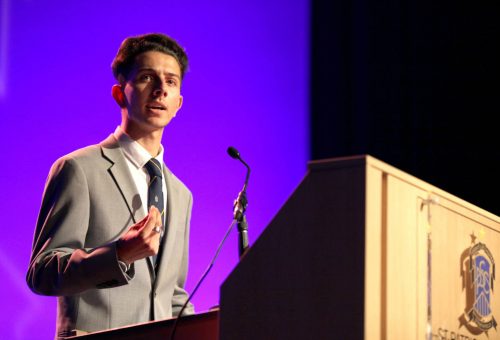 On Friday 8 February, following the Opening College Mass, the College held its annual High Achievers Assembly to acknowledge and celebrate the distinguished academic achievements of the HSC Class of 2018. Both the Opening College Mass and the High Achievers Assembly were held at the Sydney Olympic Park Quay Centre in Homebush, providing much needed room and comfort to hold such big events on the same day.

At the Assembly, we welcomed back the Graduates of the HSC Class of 2018 who achieved an Australian Tertiary Admission Rank (ATAR) of 90 and above. Each were presented with their Academic Excellence Award for Distinguished Achievement in the State. These young men represent the top echelon of HSC candidates in the State.

These young men have done themselves, their Class, their College and their families proud by their outstanding achievements. We share in their pride and congratulate each and every one of them for their hard work and determination in their academic pursuits.